Luisita Leers was a skillful power trapeze artist from Germany. During the 1920s and 1930s, Leers gained popularity both in European and American prestigious circuses such as the Ringling Brothers & Barnum & Bailey Circus. As a prodigious child performer, Leers toured in Finland with her solo trapeze act in Circus Arkadia (1923), Circus International (1923) and Circus/Ensemble Olympia (1925). By the age of 16, Leers had built her artistic identity as “a maiden of power” – a strategically chosen name which appeared in the headlines of her advertisements. Unlike other female aerialists, Leers did not hide her muscles with concealing costumes, but performed in a skin-tight leotard without embellishments displaying her masculine muscularity. 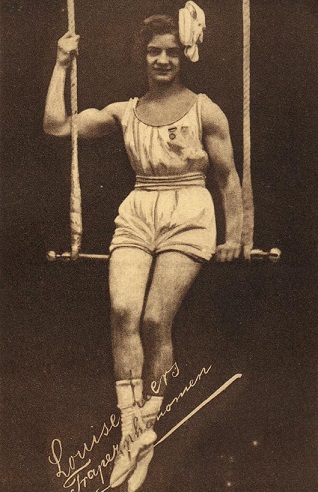 Leers returned permanently to Germany in 1936. WWII changed Leers’ life drastically. She resided with her parents in Braunschweig, but their house included her expensive stage, apparatus and her costumes which were destroyed after an Allied air raid. A letter to an American friend after the war gives suggestions why she he returned to her family in Germany and did not continue to perform in the USA. Leers explained to Sverre Braathen with a regretful tone: “It was not always selfishness, I did not do what I really wanted to do in my life. I often made the mistake of being too good with people who did not deserve it.” She regretted not having trusted those who had a good time with her. That would have made her “happy” too. Leers looking back at her life suggests that the athlete may not always have control of her own life choices. Another factor in Leers’ decision to end the visit to the USA may have been the devaluation of the dollar, which made it increasingly difficult to support the family financially in Germany.

The war was over in May 1945, but Leers’ hardships had not ended yet. Leers, suffering from malnutrition, pleaded to her American friend to send her “care-parcels” containing not only food but clothing as well. In the autumn of 1947, the critical food situation in post-war Germany intensified. Leers developed stomach and kidney problems from eating thinned soups. Also, she needed to repair her injured shoulder, but had never undergone a surgery. Leers abandoned her trapeze career ambitions forever because her physical strength had permanently vanished. In 1952, she married Gerhard Klages and became Luisita Klages. She started a new career as a translator and died at the age of 88 in 1997.