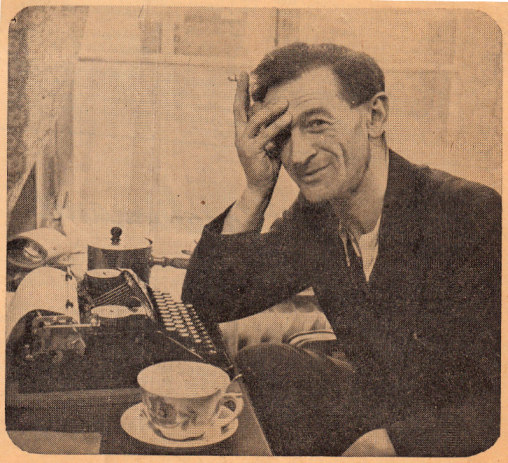 Molnar, who grew up in Vienna’s working-class area, left the Evangelical Church at the age of eighteen to join the Communist Party of Austria (KPÖ) in 1923. From 1927 to 1929, he was the sports editor of the Vienna “Red Flag”. In 1930, Molnar was accused of being a follower of Trotskyism and expelled from the KPÖ. Molnar became a “non-party Communist” as he described it. In 1934, Molnar married a Jewish woman called Hanna Raiman. In March 1938, Molnar fled from the Vienna SA via the Netherlands to the Memel region, which at that time still belonged to Lithuania. In the spring of 1939, with the help of Jewish relief committees, he continued his escape via Riga and Tallinn to Helsinki, from where he planned to flee by train to the northern Swedish port of Luleå. On the train he met Alfred Pitsch, an Austrian compatriot. Pitsch was a predator tamer, escape artist, knife thrower and lasso artist employed by the Tivoli “Sariola”, which was a mixture of fairground and circus and travelled all over Finland. Molnar decided not to continue his journey to Sweden but stayed on in Finland to help build up the Tivoli in Rovaniemi. The international milieu with artists from Estonia, Finland, Latvia, Austria, Sweden and Hungary welcomed the evader Molnar to their circle. Already in Rovaniemi, he was offered work as a lion guard for the predator tamer Pitsch. His residence and work permit, which “a hundred thousand emigrants fought for with nails and teeth”, as Molnar wrote in his autobiography “Unstet und flüchtig” (Unsteady and fleeting) from 1982, was arranged by the director of the Tivoli Johan A.F. “Jaffu Sariola”. After the outbreak of the Finnish-Russian Winter War in November 1939, Molnar and Pietsch volunteered for the Finnish army, which automatically extended their residence and work permits. After the war, Molnar travelled around Finland with the company “Sariola” for one more season (according to Molnar’s autobiography, this was with the “Circus Sariola” in 1948; however, the company travelled under the name “Circus Sariola” starting in 1949).