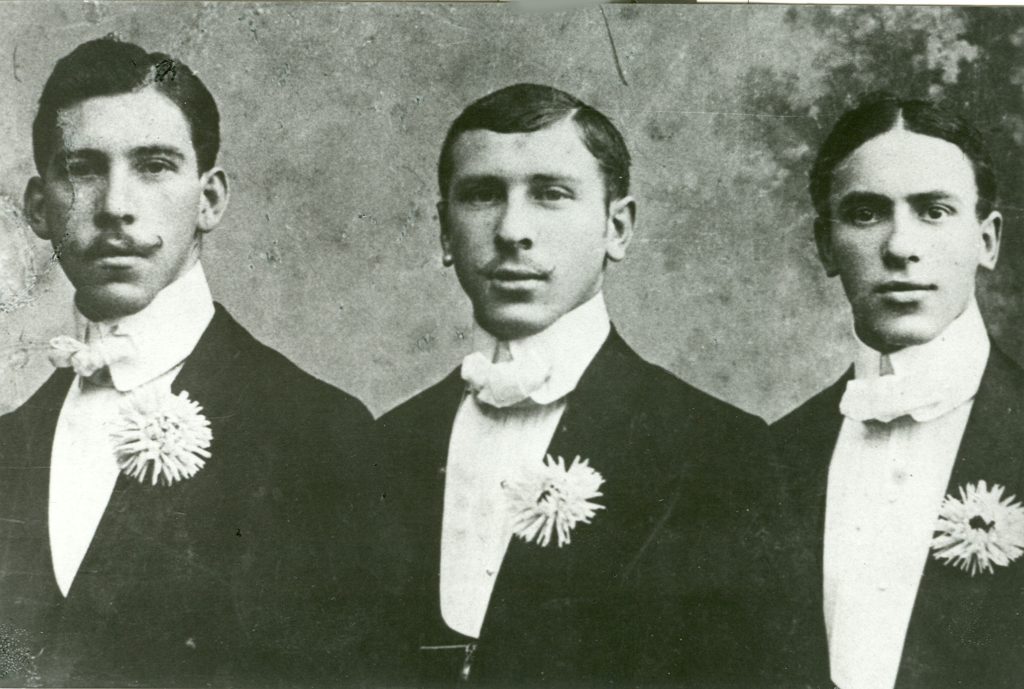 The Blumenfeld Brothers Alex [real name Emanuel] (1885-1942), Alfons (1887-1942), and Arthur (1889-1951), as well as their eight further siblings came from a widespread German-Jewish travelling circus family, from which several circus enterprises emerged. Together with their uncle Hermann, the brothers owned the stationary circus building in Magdeburg, which they mainly rented for guest performances of other circuses, variety events, and cinema shows. The brothers themselves preferred to travel with their 1919 established Wanderzirkus Gebrüder Blumenfeld jun. (Travelling Circus Brothers Blumenfeld jun.). The three directors played a leading part in the program: Alfons with a liberty horse act, Arthur with two trained bulls, and Alex with a high school dressage on his famous horse “Puppchen” (Little Doll), which danced to operetta melodies. A part of their siblings also worked in the circus in various functions. As so many German circuses in the 1920s, the Blumenfeld brothers slid into severe financial difficulties, so that bankruptcy proceedings had to be opened in 1928. The complete lack of financial means forced the Blumenfeld brothers to go separate ways. Alex spent the next seasons as horse trainer and performer in Scandinavia (Bech-Olsen, Altenburg) and the Netherlands (Roberti), Alfons as program director in Austria (Medrano-Swoboda), while Arthur performed his liberty horse act in the German circus Adolf Fischer.

Alex Blumenfeld used a circus engagement in Denmark in 1937 for emigration. One year later, he moved to Belgium, and finally to France. He tried in vain to achieve an entry permit to Sweden, Luxemburg, or Great Britain. When the war broke out, his situation worsened severely. The French police arrested him as “enemy alien” and sent him to the internment camp of St. Cyprien in Southern France. For some time, Alex was able to correspond with his wife Eugenie (1893-1981), who belonged to the Italian circus family Cardinale and had stayed in Belgium. After several transfers to other camps, Alex got to Drancy, from where the Germans deported him to the concentration camp Auschwitz on August 14, 1942. There, his trace is lost.

Alfons Blumenfeld had emigrated to Paris in December 1938, together with his wife Olympia, who descended from the Hungarian artist family Könyot. At the beginning of the war, the French authorities interned Olympia in the camp Rivesaltes, while Alfons went through several camps in Southern France, beginning with Bram. For both of them, the way ended in separate transports to Auschwitz via Drancy.

Arthur Blumenfeld had settled with his wife Victoria (1897-1990) and his two daughters Rita and Eva in Berlin in 1933. Victoria came from another branch of the Blumenfeld family, but she managed to register herself as alleged adopted child of unknown “Aryan” origin. Thanks to the supposed “mixed marriage”, the family was safe from deportation, but the German authorities subjected Arthur to the usual discriminations like forced labour and the wearing of the Jewish badge.

Arthur Blumenfeld lost nine brothers and sisters during the Nazi period. He and his sister Jeanette (1897-1969), who lived in England, were the only survivors. After the war, Arthur tried to revive the Blumenfeld Circus in Berlin, but a heavy storm damage and the consequences of the Berlin Blockade forced him to give up in 1949. Two years later, he died at the age of 62.