Our project ‘Diverging Fates: Travelling Circus People in Europe under National Socialism’ wants not only to foster new scholarship and commemorational approaches, and a new identification of the circus as a cosmopolitan environment in Europe in the wake of WWII. Including a critic of mainstream interpretations denying the existence of cosmopolitan areas at that time. In addition, the project wants to stimulate new educational approaches and to provide a new general perception of the living conditions and security strategies of transnational minorities in European societies. As such, the project is highly relevant for drawing lessons for mutual understanding and tolerance for the Europe of today and tomorrow. Thus, the project addresses current societal issues. What we presently say with certainty is that marginalized groups were and still are used and forced to cultivate and practice ingenuity.

We invite students to read our short biographies on European circus people during WWII and to highlight which kind of security strategies minority groups developed to survive. By doing this and within a precise chronology, they will have to take into account contexts, geographical area, identities, gender, family structures, life courses. We consider that life stories are a strong pedagogical tool to deepen a better understanding of Europe during the 1930’s and 1940’s, and to develop tolerance and empathy among young generation, and offer a new general understanding of marginalized communities’ security strategies.

The following subjects and questions shall facilitate the work with the website:

What makes it legitimate to speak about circus people as ‘Forgotten Cosmopolitans’? Whilst reading the stories, discover transnational networks, nationalities, and diverse ethnic and social groups that composed the cosmopolitan world of the circus. What made circus people suspicious for state authorities? Can you identify present discussions about people with transnational background in politics and media? What are these discussions about?

Based on the fates of Houssein ben Ibrik and Carl Strassburger, what impact had the National Socialist racial policy on their lives?

Itinerant groups in Europe in the Wake of WWII

What were the typical forms of oppression exercised by state authorities in France and Italy against itinerant groups? Based on Turcho Chukoev life course, what was the position of the Bulgarian government towards Roma groups? Discuss your findings.

Surviving the Holocaust in the circus

What sort of protection could circuses offer to those who were persecuted by the Nazi regime and their allies? Within this task have a look at the picture displayed below, and discuss the fate of Irene Bento. 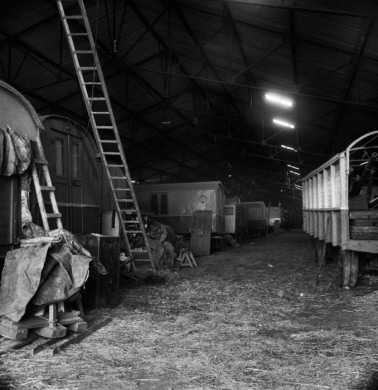 Winter grounds of the Circus Amar in Blois 1941, copyrights Getty

Draw the map of a Jewish circus artist fate: Compare and discuss the biography of Hugo Strassburger with the routes and fates of other persecuted circus artists.

Based on Raymond Gurême’s life story, explore which strategies he developed to survive. What kinds of general security strategies of minority groups can you observe today? Give examples.